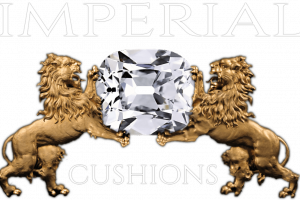 THE MAGNIFICENT COLOURLESS CUSHION DIAMONDS – THE “OLD MINE” CUT

” … The most perfect diamonds are crystalline, and resemble a drop of clear springwater, in the middle of which you will perceive a strong light playing with a great deal of spirit. ” W .H. Pepys On Gems 1803

The name “Old Mine” cut, refers to a particular style of early brilliant cut diamond (circa 1850) which featured a cushion or square shaped outline with rounded corners and curves, and a unique set of proportions. these actually produced an extraordinary blend of “brilliance” (i.e., white light) and ~’fire” (i.e. rainbow colours)

Today. the circular brilliant cut is the standard, and other shape outlines (e.g., cushion) are only applied when the rough favors them. However, during the last three hundred years. a number of large cushion-shaped brilliants have been fashioned, including the Tiffany (yellow), the Regent (colourless), Polar Star (colourless), Queen of Holland (colourless), Jubilee (colorless), Emperor Maximillian (colourless), and the Cullinan II & Cullinan IV (colourless) diamonds (Ayer 1971; Balfour 1997; Copeland 1974).

” … The Regent diamond … because of its excellent proportion and exceptional symmetry, it was regarded for centuries as unrivalled in every aspect …. this obviously resulted in uniform brilliance – virtually unheard of in cushion shaped diamonds.” 11. Tillander diamond cuts in historic Jewelry 1995 .

An excellent example is the famous Cullinan II diamond, the largest and most celebrated cushion cut colourless diamond among the English Crown jewels (Balfour 1997). Polished between March and September 1908, the cushion-shaped Cullinan II is one of the most recognizable and valuable colourless diamonds in the world and a major attraction at the Tower of London, where it is set in the brow of the Imperial State Crown (Blair 1998). ”

The Cullinan, thanks to its exceptional qualities of water /i.e., colour/ and cut, is considered the finest diamond in the world, and its glorious history, added to its qualities, make it assuredly the most costly gem in existence.”
I. Balfour Famous Diamonds 1997

The slight differences between the older and modern “old mine” cuts (i.e .. perfection of faceting), adds considerable “life” (i.e. brilliance and scintillation) to these one-of-a-kind diamonds. The result is a breathtaking, undulating, and restless mosaic of white and neutral colours. that truly is an artistic crystalline creation which features superb brilliance. magnificent dispersion and excellent scintillation for such beautiful colourless diamonds.

On the next article we will discuss color characteristics such as hue, lightness, saturation and face up color. as well as the different names and terms that were used to describe these magnificent and magical stones. Stay Tuned!